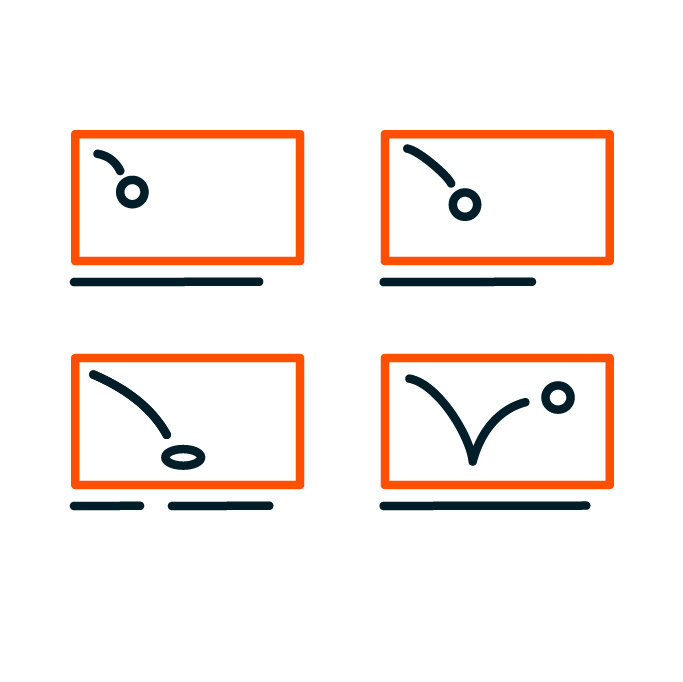 After the Vegas, The Grand Canyon we drove through Joshua Tree to finally get some rest in San Diego. Sadly we weren’t able to meet up with Ash Thorp due to his very busy schedule. Nevertheless we had a great time in San Diego and got the rest we really needed for the next big city: L.A.!!

We have so much to tell about this city, but let’s just start at the beginning. We could stay in Mike Colarik’s place, we were introduced through our mutual friend Stephan van de Brink. Mike welcomed us in his apartment where we met his 2 roommates Joseph DeMara and Alan Avery-Medina. And we can say that we had the best stay of our entire trip! On our first day Mike took us to a nice place in Venice “Toms”, it’s a store // coffeeshop. An awesome place to just hang out and meet up with people. That night a whole bunch of their friends came to their apartment and we had dinner together. What an amazing welcome, blown away by all the awesome people surrounding us. Most of the time in this trip we are just with the two of us,, but in LA there were always people around us who wanted to take us out and see the city. Most of the times it was Mike, Alan or Shelley (a friend of Mike and Alan) and her boyfriend Jeremin. These awesome people made L.A. the craziest experience of the trip so far, and we mean that in a good way!

The same night we arrived in L.A. and we met all these awesome people, Mike and Alan took us on a night drive through the city. We drove on Mulholland Drive so we can see the valley and downtown at night. What an amazing view! When we got back to the apartment it was already past 2AM, little did we know.. that this was just a small taste of what was waiting for us the next week! That night Alan made a “TODO” list with the help of his friends, of all the things we should see and do while we’re there. It became a TODO list for 21 days, and we had to make it happen in only 7!!!

The next day it started for real and Alan showed us more of the city, the hollywood sign, The last book store, Olvera Street where we got some real mexican taco’s as a snack. We met up with Mike downtown for lunch since he had to work during the day. Alan told us more about L.A. and how the people live there. So many impressions in so little time, a rush of L.A. vibes and environments. And thanks to Alan we could just sit back and enjoy the ride, wow!

The next couple of days we also met up again with Shelley and Jeremin and got some dinner together, saw the Santa Monica Pier at night, more of Downtown and Mike and Alan introduced us to the most amazing Ramen restaurant we have ever been to: “Tatsu – Ramen with a soul”. Tatsu alone is a valid reason to travel all the way to L.A.! Either way, we can say that we had a CRAZY schedule and we went to bed (or to the couch) around 2-3AM for a minimum amount of sleep.

Shelley had also arranged a surprise for us: we got invited to a very exclusive ‘invite-only’ club called “The Magic Castle”. We got invited by member and magician Micah Cover. But first we had to find some suits for us, because it’s a dress to impress party, and with our jeans and T-shirts we were doomed to be kicked-out of there. So since we didn’t want to hurt the reputation of Shelley or Micah we searched for some suits the morning and we got ourselves a nice outfit with some help of the amazing style advisor Shelley!

That afternoon we had an appointment with the one and only Joe Mullen from Buck L.A., but we’ll write more about that awesome meeting later! After our meeting with Joe @ Buck studio in Downtown L.A. we searched for our car and came to the conclusion that the friendly people of L.A. towed our car!! With our suits and everything still in it! In blind panic we called Shelley and she arranged that we could pick up our car at a towing company nearby. After a $ 232,- fee (!!!) we got our car back again and we learned a valuable (and expensive) lesson about the parking rules in L.A.: don’t trust the parking advice of the city security guards.

Nevertheless we had our car and suits back and were ready for a magical night in Magic Castle Club. It’s too bad that there weren’t any camera’s allowed. But it’s maybe for the best,, because the whole place is so mysterious and magical that it’s hard to capture it all in a photo. Magicians in every corner showing their magic skills and even whole magic shows you can see right there in the mansion. Micah gave us a tour around the mansion and told us all the little secrets about “the castle”. We even met Milt Larsen, the man who started and even helped building this amazing place! It’s hard to tell everything what was going on in this place, because we saw so much! Levitating people, flying pigeons out of thin air, mind-blowing card tricks and much much more! Because everything felt so exclusive and mysterious this night was maybe the best night of entire time in L.A.!

We did so much in Los Angeles that it’s to much for just one post,, in the next post we’ll talk more L.A. We talked more with Micah Cover about his personal vision as a magician, we stayed for 2 days at Venice Beach and we met up with even more people! And don’t forget the fact we met up with the guys of Buck L.A.!